Birao is the capital of Vakaga, one of the 14 prefectures of the Central African Republic and was an administrative post in the colony of Ubangui-Shari. In March 2007, the town was almost completely burnt down in the fighting between rebels and government troops in the area. The Central African Republic Bush War or, wait for it, the car war, get it? Get it? No? Well, the CAR War, was a civil war in the Central African Republic between Union of Democratic Forces for Unity (UFDR) rebels and government forces. The rebellion began after François Bozizé seized the nation’s presidency in 2003. Actual fighting began in 2004. Around 10,000 people were displaced because of the civil unrest.

The rebellion consisted of multiple rebel groups, several of which were of very small size and founded only towards the end of the conflict. Apart from the UFDR, or the Union of Democratic Forces for Unity, the conflict included the People’s Army for the Restoration of Democracy (CAR) (APRD), Groupe d’action patriotique pour la liberation de Centrafrique (GAPLC), the Movement of Central African Liberators for Justice (MLCJ), the Front démocratique Centrafricain (FDC), and Union of Republican Forces (UFR). In short a lot of Acronyms were basically shooting each other off the map.

I know we might all be wondering why a war in an African country matters anyway, but after the March 2007 attack in Birao, almost the entire population of 14,000 fled the area, making it one of Africa’s notable Ghost Towns! The fighting was intense and devastating for Birao’s inhabitants. More than 700 houses were burned, destroying vital stocks of food and seeds for the coming planting season.

A joint mission by UN agencies and non-governmental organizations visited remote Birao in the far north-east of the Central African Republic and found that while some of the town’s residents were slowly starting to return and had begun to reconstruct their homes by the weekend of March that same year, others were too afraid to come back. Some residents had fled to Am Dafok at the border with Sudan and some 2,000 to 3,000 inhabitants of the region have sought refuge in Sudan’s Darfur region, where they are being helped with basic supplies by a joint UNHCR/NGO team. By 2012 the population count had risen to 10,178 people and surprisingly there “Ghost Town” status gave rise to a new opportunity in Adventure tourism. All’s well that ends well I guess.

It is the largest island of Angola; its area is 98 km². It once had been a small peninsula in Baia dos Tigres known as Península dos Tigres with a well-established fishing village named Tigres (Yes we do agree with you here at African Explorer magazine, that is a lot of Tigres!) All in all though the reason tiger island became an island is the ocean broke through the isthmus of the peninsula on March 14, 1962, the water line was severed, and just like that, Tigres became an island overnight but, with no water supply.

The Island was once a thriving commercial fishing community in the Portuguese colonial era, connected to the mainland by a small sand causeway.

The inhabitants abandoned the Island in 1974 to escape the strong wind, lack of drinking water and the transportation difficulties to the mainland. Filled with hundreds of abandoned Portuguese-style buildings and properties, the structures are now being enveloped by the continual blowing sand.

Though the waters surrounding the island are very rich in fish stocks, the location is renowned for its birdlife. Two surveys of the Island region in 1999 and 2001 indicated a rich wetland bird diversity consisting of 25 species and a bird density of 33 birds per square kilometer.

Hundreds of years ago a French colonial settlement located in this place. The city settled down in an impossibly beautiful area and was remarkable for its housing development. Initially it was a tourist center with lots of guesthouses, and most beautiful parks and gardens. In 1896, the French Government decided to leave the city because of the regular outbreak of yellow fever. However, for a few more decades Grand-Bassam has remained the main tourist attraction and its infrastructure was being improved.

In the 60s of the last century Grand-Bassam began to lose its former popularity and gradually fell into ruin. In 2012 the historical center of the city was recognized a global sight and became a UNESKO heritage. The greatest value of the abandoned town are the architectural monuments that maintained their impressive appearance despite the town’s difficult period. Unique monuments that date back to the old colonial days are surrounded by dense vegetation which is not peculiar to this area. Grand- Bassam really looks like a wonderful oasis-mirage from the past.

Also known as La Agüera, Lagouira, or El Gouera) (Arabic: الكويرة‎/ alkawayra) is a ghost town on the Atlantic coast at the southern tip of Western Sahara, on the western side of the Ras Nouadhibou peninsula, 15 kilometres (9.3 mi) west of Nouadhibou. It is also the name of a daira at the Sahrawi refugee camps in south-western Algeria. The name La Güera comes from the Spanish word Agüera which is a ditch that carries rainwater to crops.

It is the southernmost town of Western Sahara, claimed by the Kingdom of Morocco. La Güera is situated south of the Moroccan Wall, and is technically abandoned by both Moroccan and Polisario Front forces.

La Güera came into existence in late 1920, when Spanish colonizer Francisco Bens (who had earlier taken possession of the Cape Juby region as a protectorate in 1916), after negotiating with tribal chiefs of the zone, established a fort and an air base on the western side of the Ras Nouadhibou peninsula, just a few miles away from the French settlement of Port Étienne (now Nouadhibou) on the eastern side of the peninsula. (In the 1912 Convention of Madrid, Spain and France had agreed on a border between Mauritania and Spanish possessions that ran down the middle of the peninsula.)

In 1924, La Güera was incorporated into the Spanish colony of Río de Oro. During the short period (1920-1924) that the town was ruled as a separate part of the colony it released its own postage stamps. The town was served by La Güera Airport until the 1970s.

In 1979, when Mauritania withdrew from the war, La Güera’s population was estimated to be 816 inhabitants.

By 2002, it had been abandoned and partially overblown by sand, inhabited only by a few Imraguen fishermen and guarded by a Mauritanian military outpost, despite this not being Mauritanian territory. 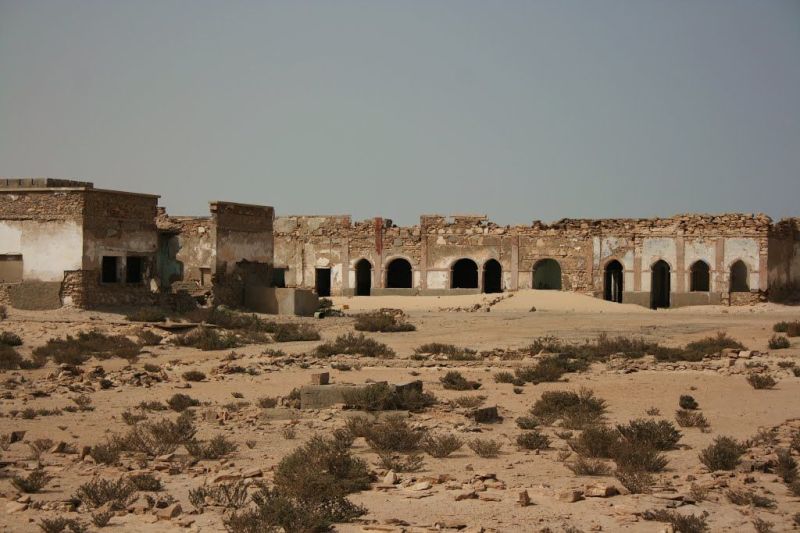 Kolmanskop is a ghost town near the port town of Luderitz in Namibia and perhaps one of Africa’s most impressive abandoned places.  A hangover from the heady diamond rush days that gripped the region after 1908, Kolmanskop’s unusual appearance for a desert ghost town reflects the wealth acquired by the German miners who sought their fortunes there, and the zeal of the German imperial government to stop others getting their hands on the loot.

Their newly acquired wealth allowed residents to develop Kolmanskop in the architectural style of a German town, complete with hospital, ballroom, power station, school, theater, casino, ice factory, bowling alley (intact to this day),and a railway connection to Luderitz.  Kolmanskop was exempt from a government ban on new mining claims in the area, but ultimately became a ghost town when the diamond market dried up.