“When you hear about slavery for 400 years—for 400 years? That sounds like a choice.” When Kanye West, one of the most successful African American Hip-hop artists of our generation, made this controversial comment about slavery being a choice, the internet was set ablaze with people taking to twitter, and other social media platforms to shun the hip hop artist for his insensitive remarks. Although this comment observed from a different vantage point could shed some light on what he was really trying to communicate. We take a look at the lives a few of our African Geniuses who are lost to the world due to poverty, and because of a society that has over the years become hostile to the intellectual mind, a society that choses everyday to shun the talent of its own children and hail those of it’s neighbors. Could these and other similar choices be what led to the complacency that kept us enslaved in America for all those years?

Dubbed the opportunity boy by the media, Maurice shot to fame after a short video of him went viral on Facebook. He was interviewed by Shamit Patel of Homeless of Nairobi project. He tackled the issue of homelessness in the underbelly of Nairobi with poise and composure of a seasoned diplomat which earned him an internship at the Chief Justices’ office. Things seemed to be on the up and up for the young chap and it wouldn’t have taken too long for him to not only be placed in a home but to go to school. At the time even politicians got in on the celebrations and rumors of his adoption started making rounds in the grapevine with some saying that he had been adopted by Mike “Sonko” Mbuvi, a wealthy Kenyan politician who currently serves as the Second Governor of Nairobi since devolution. Sadly like many before and probably after him his story was a classic rags to riches and back to rags again story. He’s last known address was Gachie where he is still said to live in conditions of abject poverty.

The man from Bida, Niger state

This is probably the saddest story in this list, to the world press he is only known as the young man from Nigeria. A viral sensation who captured people’s attention when his car made almost completely of wood and run using a motor bicycle engine started popping up in social media sites. The name Ahmed Aliyu has such few mentions that we almost lost hope at ever finding out his name. The Minister of Science and Technology, Dr Ogbonnaya Onu, even rode in the car at the 2017 Technology and Innovation Expo held in Abuja. Other than that very little has been heard of this man in international press since. 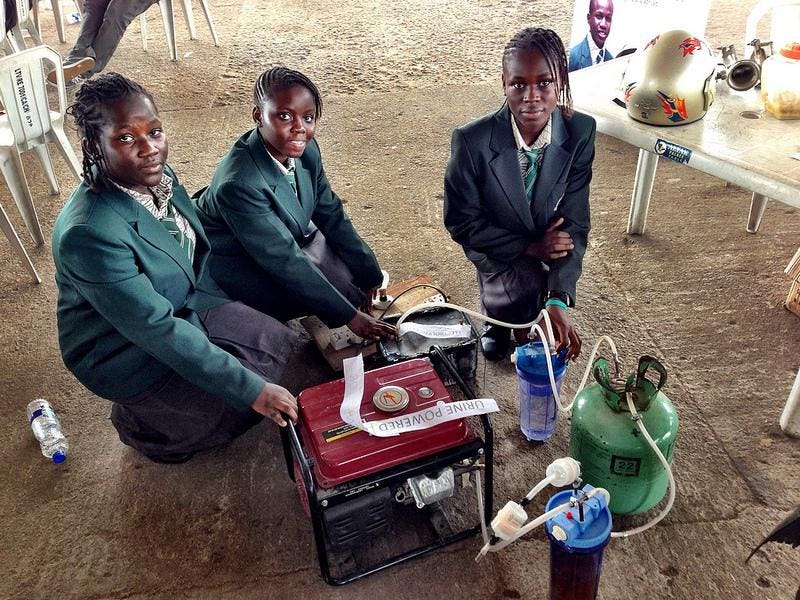 Fourteen-year-olds Duro-Aina Adebola, Akindele Abiola, and Faleke Oluwatoyin, and 15-year-old Bello Eniola created a way to use Urine as fuel. Using a litter of Urine, these girls went past the stench to discover a way to run a generator for six whole hours! Displaying their invention at the Maker Faire Africa in Lagos, Nigeria, an annual event meant to showcase ingenuity, what they had first thought was a simple science project  created a buzz at the world stage with articles from prestigious and notable magazines like Forbes, and Times Magazine. That was back in 2012 though, if by any chance they were still working to improve on the design such a high profile story should have gotten an article or two, although nothing has been heard of so the quartet so far, if you have any information on these girls please let us know in the and let us keep the fire alive.

This was just a single drop in the Ocean. Stories like these keep popping up everyday, leave us a comment in the comment section below on stories like these and many more you would like to see featured on African Explorer Magazine.