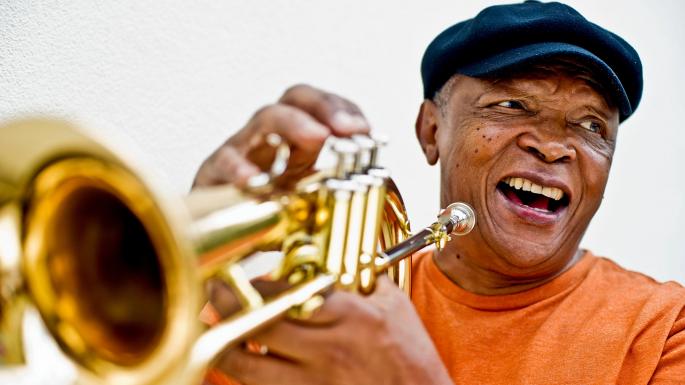 Born Hugh Ramapolo Masekela on 4 April 1939 in  KwaGuqa Township, Witbank, South Africa to Thomas Selena Masekela, who was a health inspector and sculptor, and his wife, Pauline Bowers Masekela, a social worker, He went on to become one of the most notable trumpeters, flugelhornist, cornetist, composers and singers in African, and the world’s History. He has been described as “the father of South African jazz, and before his death in  23 January 2018, the richest African Musician, at least according to the 2017 Forbes list which estimated his wealth at a whooping 275 Million Dollars! Masekela was nominated for a Grammy Award three times, including a nomination for Best World Music Album for his 2012 album Jabulani, one for Best Musical Cast Show Album for Sarafina! The Music Of Liberation (1989) and one for Best Contemporary Pop Performance for the song “Grazing in the Grass” (1968). Masekela died in Johannesburg on the early morning of 23 January 2018 from prostate cancer, aged 78.

Born October 1st 1959 Youssou Ndor is a Senegalese singer, songwriter, composer, occasional actor, businessman, and politician. In 2004, Rolling Stone magazine described him as, “perhaps the most famous singer alive” in Senegal and much of Africa. N’Dour helped to develop a style of popular Senegalese music known in the Serer language as mbalax, which derives from the conservative Serer music tradition of “Njuup”. N’Dour was born in Dakar to a Wolof mother and a Serer father. He started performing at age 12 and was performing regularly with the Star Band, Dakar’s most popular group during the early 1970s, within a few years. Several members of the Star Band joined Orchestra Baobab at about that time. In Senegal, N’Dour became a powerful cultural icon, actively involved in social issues. In 1985, he organized a concert for the release of Nelson Mandela. He was a featured performer in the 1988 worldwide Amnesty International Human Rights Now! Tour collaborating with Lou Reed on a version of the Peter Gabriel song “Biko” which was produced by Richard James Burgess and featured on the Amnesty International benefit album The Secret Policeman’s Third Ball. He worked with the United Nations and UNICEF, and he started Project Joko to open internet cafés in Africa and to connect Senegalese communities around the world. His hardwork and persistence has earned him the title of the second richest African Musician with a cool 175 Million Dollars.

The group comprised of identical twin brothers Peter Okoye and Paul Okoye began exploring their talent in St. Murumba secondary school, a small Catholic school in Jos, Plateau State Nigeria. Peter and Paul joined their school music and drama club where they began singing, dancing, and mimicking songs by MC Hammer, Bobby Brown and Michael Jackson. In 2001, “P-Square” won the “Grab Da Mic” competition, and hence Benson & Hedges sponsored their debut album, titled Last Nite, which was released under Timbuk2 music label. P-Square was also nominated as “Most Promising African Group” in the Kora Awards three months after the release of their debut album. They eventually won the 2003 Amen Award for “Best R&B Group”. Late in 2007, they released their best selling album so far, Game Over. It sold 8 million copies worldwide. They produced and released their albums through Square Records. In December 2011, they signed a record deal with Akon’s Konvict Muzik label. In May 2012, they signed a record distribution deal with Universal Music’s South African branch. On 25 September 2017, numerous media outlets reported that the group disbanded. Reports about a breakup surfaced after Peter reportedly sent a termination letter to the group’s lawyer. Prior to this report, the duo disbanded in 2016, supposedly over a disagreement about the role of their manager. The following year though they still managed to nab the spot of number 3 in the Forbes ranking of the Richest Musicians in Africa with an estimated net-worth of 70 Million Dollars.

Oladapo Daniel Oyebanjo born 9 June 1980, known by his stage name D’banj, is a Nigerian musician, singer-songwriter, entrepreneur and television personality. He has won several music awards, including the awards for Best African Act at the MTV Europe Music Awards 2007,[4] Artist of the Year at the MTV Africa Music Awards 2009,[5] Best International Act: Africa at the 2011 BET Awards, and Best-selling African Artist at the 2014 World Music Awards, Evolution award at the 2015 MTV Africa Music awards He adopted the stage name D’banj, a combination of his first name, Dapo, and his surname, Oyebanjo.[4] D’banj is currently best known internationally for his 2012 summer hit “Oliver Twist”, an uptempo dance fusion of Afrobeat and electronic dance music that topped the African charts 2011 and was a top 10 hit in the UK singles chart in 2012 reaching No. 2 on the UK R&B chart. As of 2016, D’banj is ranked to be the richest solo musician in Nigeria according to T.I.N Magazine, and Africa’s 4th richest according to Forbes Magazine with a Net-worth of 25 Million Dollars.

Innocent Ujah Idibia (born in Jos, Plateau State, Nigeria), known by his stage name 2Baba, is a Nigerian singer, songwriter, record producer and entrepreneur. Prior to July 2014, he went by the stage name 2face Idibia.[1] He is one of the most decorated and successful Afro pop artists in Africa, and is also one of the most bankable artists in Africa. 2Baba has received one MTV Europe Music Award, one World Music Award, five Headies Awards (Hip-hop award), four Channel O Music Video Awards and one BET award for his musical work, four MTV Africa Music Awards, one MOBO award, one KORA award, and numerous additional nominations. He comes in fifth in this list with a net-worth of 22 Million Dollars.