William Unek (1929-February 21, 1957) was an African police constable and mass murderer who killed a total of 57 people in two separate spree killings three years apart. Unek worked as Police Constable or Police soldier in the Belgian Congo. His first murder spree occurred near Mahagi, Belgian Congo on January 1, 1954, where he killed 21 people and wounded many more with an axe in less than an hour and a half, before escaping and finally ending up in British Tanganyika Territory, where he assumed a false identity, found work and began a new life. Apparently because of social misunderstandings with his boss, Unek went on a second rampage which began in the early hours of February 11, 1957. Armed with a stolen Enfield-type police rifle, 50 rounds of ammunition, and an axe, he started killing people in the area of Malampaka, a village about 40 miles southeast of Mwanza. He broke into several houses and shot anyone he saw inside.

Within twelve hours, Unek shot dead ten men, eight women, and eight children, murdered five more men with the axe, stabbed another one, burned two women and a child by trapping them in their house and setting it on fire, and strangled a 15-year-old girl, thus killing a total of 36 people. He then changed out of his police uniform into clothes stolen from one of his victims and fled. Among the dead was reportedly his own wife, whom he killed in their hut before setting it on fire, as well as the wife of a police sergeant.

For nine days, Unek was sought by Wasukuma tribesmen, police, and eventually a company of the King’s African Rifles in Tanganyika’s greatest manhunt up to that time. Despite the extensive search operation, including dogs and aircraft, and a posted reward of $350, Unek eluded his pursuers until he finally showed up at the house of Iyumbu ben Ikumbu, who lived only two miles away from Malampaka, in search for food. When Iyumbu reported the incident to police, he was asked to keep Unek with him and notify them, should the killer come again to his home. Unek, still armed, reappeared at about 1:00 a.m. the next day. Iyumbu, sending his wife to police, gave Unek food and engaged in a conversation with him for nearly two hours until help arrived. At that point, Iyumbu ran out of his house whereupon a Police Superintendent threw a smoke bomb, setting the house on fire. Unek, severely injured when attempting to evade capture, later succumbed to his wounds in hospital. Iyumbu later received a financial reward of £125, as well as the British Empire Medal for his bravery leading to the capture of the constable. 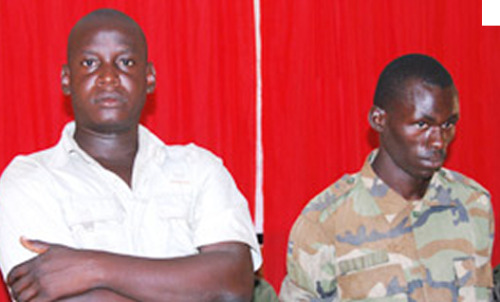 Richard Komakech, a private in the Ugandan military police, was attending the wedding when he requested a female guest, Irene Ati, to dance with him. Ati declined the offer, but Komakech repeatedly insisted she danced with him to the point he became aggressive and had to be separated from her. Komakech began rioting and was expelled from the festivities. The drunken private then went to fetch a semi-automatic rifle and returned to the party about ten minutes later. Komakech first killed Irene Ati, and then started shooting randomly at the guests, in which 14 people died on the spot (including Irene Ati) and 12 more later died in hospital, while 13 others were seriously wounded. Komakech eventually attempted to commit suicide with his rifle by shooting himself in the mouth, though he suffered only wounds to his forehead and pretended to be dead until police arrived. Although officers who apprehended Komakech tried to prevent the guests from killing him, Irene Ati’s father managed to break through the police cordon and killed Komakech by smashing in his skull. By the end of the massacre a total of 27 people had been killed.

The Meet al-Attar shooting was a mass shooting that occurred in Meet al-Attar  a village near Banha, Egypt on August 21, 2013, when Omar Abdul Razeq Abdullah Rifai  a 28-year-old unemployed poultry dealer and ex-convict who was released from his sentence in 2013 after his involvement in the death of 23 people in 2008 over a family feud, fatally shot 15 people and possibly wounded several others, using an AKMS assault rifle, before being shot dead by villagers himself. In total, he has killed 38 people in a span of 5 years.

On the evening of 25 December 1994, at about 9 p.m., 28-year-old police officer Alfred Ogwang, who was stationed at the Kamwenge Police Post, went to attend a disco dance at the Kamwenge Trading Centre. When he tried to enter the canteen to get some beer at about 11 p.m., he found the door blocked from the inside by several guests. After he was finally let in, he got into an argument with Geofrey Ruhara for this provocation, whereupon all the guests were taken out of the canteen. Outside, Ruhara apologized to Ogwang, who, still angered about the incident, then went home. Upon returning to the barracks he fetched his gun, which was described as an SMG rifle, and made his way back to the Trading Centre.Just after midnight Ogwang began shooting in the canteen, where he first shot dead Geofrey Ruhara, before killing John Rutaro, Patrick Kugonza, and Stephen Chance. Yelling “I will finish you all!” he then turned his rifle against the crowd in the dancing hall. When the generator was switched off, and the lights went out in the building, Ogwang stopped firing and fled. By then he had killed 13 people and wounded 14 others.

In the morning, at about 7 a.m., he was met at the barracks by Inspector Kisembo, who said he was awakened by some shots. Ogwang aimed his rifle at Kisembo, who managed to wrest it from the gunman’s hands after a short struggle. While Kisembo went back to sleep, Ogwang escaped to Dura where he had a brother at an army post. There, he was arrested the next day and brought back to Kamwenge. An examination of his mental state, conducted on 29 December, found him to be sane. During his trial Ogwang denied having committed the murders, saying that he had handed his rifle to a member of the Local Defence Unit at the entrance of the disco, not knowing what had happened to it afterwards. He also stated that he was too drunk to remember anything that night, and that he only learned about the shooting the next morning, when an angry crowd appeared at the barracks, accusing him of killing people at the disco, though the judge dismissed all of these claims and found him guilty of 13 counts of murder. Ogwang was sentenced to death by hanging, but his sentence was commuted to life imprisonment in 2010.