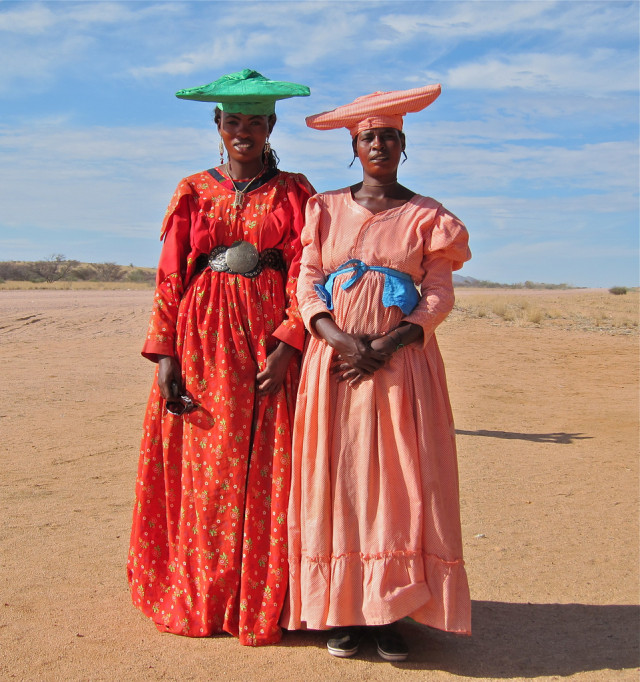 The Herero, also known as Ovaherero, are an ethnic group inhabiting parts of Southern Africa. The majority reside in Namibia, with the remainder found in Botswana and Angola. There were an estimated 250,000 Herero people in Namibia in 2013. They speak Herero (Otjiherero), a Bantu language. Unlike most Bantu, who are primarily subsistence farmers, the Herero are traditionally pastoralists. The main Herero group in central Namibia (sometimes called Herero proper) was heavily influenced by Western culture during the colonial period, creating a whole new identity. The dress of the Herero proper, and their southern counterparts the Mbanderu, incorporates and appropriates the styles of clothing worn by their German colonisers. Though the attire was initially forced upon the Herero, it now operates as a new tradition and a point of pride.

During the 1904-07 war, Herero warriors would steal and wear the uniforms of German soldiers they had killed, believing that this transferred the dead soldiers’ power to them. Today, on ceremonial occasions, Herero men wear military-style garb, including peaked caps, berets, epaulettes, aiguilettes and gaiters, “to honour the fallen ancestors and to keep the memories alive.” Herero women adopted the floor-length gowns worn by German missionaries in the late 19th century, but now make them in vivid colours and prints. Married and older Herero women wear the dresses, locally known as ohorokova, every day, while younger and unmarried women wear them mainly for special occasions. Ohorokova dresses are high-necked and have voluminous skirts lavishly gathered from a high waist or below the bust, incorporating multiple petticoats and up to ten metres of fabric. The long sleeves display sculptural volume: puffed from the shoulders or frilled at the wrists. Coordinating neckerchiefs are knotted around the neck. For everyday wear, dresses are ingeniously patchworked together from smaller pieces of fabric, which may be salvaged from older garments. Dresses made from a single material are reserved for special occasions.

There are people in the Republic of the Congo who proudly strut down dirty hutted streets in alligator boots and designer suits, otherwise living in poverty. When you dress up you really are the best,” Maxime Pivot from Brazzaville, the capital city of the central African country, told RT’s documentary channel RTD. Always dressed in bright suits, the man calls himself “the king of color.” Where ever he goes, people shout “The god of clothes!” and “The pride of our area!” while falling to their knees. He’s “unbeatable,” they say. Being a proud member of the appearance-obsessed group known as “The Society of Ambianceurs and Elegant People” – or “La Sape” – comes at a price. The men have been dressing like “dandies,” as they say, since the Congolese soldiers who fought in France during World War II returned home to Africa, bringing Parisian fashions with them. La sape can be traced back to the period of colonialism in Africa, and in particular Brazzaville and Kinshasa. The French mission was to civilize the “uncouth” and “naked” African people. They brought second hand clothing from Europe as a bargaining tool to gain the loyalty of the chiefs. Brazzaville soon became the “most favored residential area for whites and the seat of colonial government.” By the end of the 19th century their “houseboys” were the first to embrace European modernity because they would be given clothing instead of money as compensation for their work. The Congolese elite not only included the houseboys, but also those who held lower positions as clerks in colonial offices and other places. The noted musician Papa Wemba was an important supporter of La Sape in Congo
A major influence on the Congolese elite, present during the 1920s (the so-called Roaring Twenties), was West African colonial workers who came to the Congo. These Bapopo or Coastmen, as they were called, served as inspiration for the Congolese elite “to combat ingrained charges of inferiority leveled at them” by French and Belgian colonialism. Young Congolese men took the style of their masters’ and made it their own. In the historian Didier Gondola’s essay titled “La Sape Exposed!: High Fashion Among Lower-Class Congolese”, he says: Captivated by the snobbery and refined elegance of the Coast Men’s attire, Congolese houseboys spurned their masters’ secondhand clothes and became unremitting consumers and fervent connoisseurs, spending their meager wages extravagantly to acquire the latest fashions from Paris. 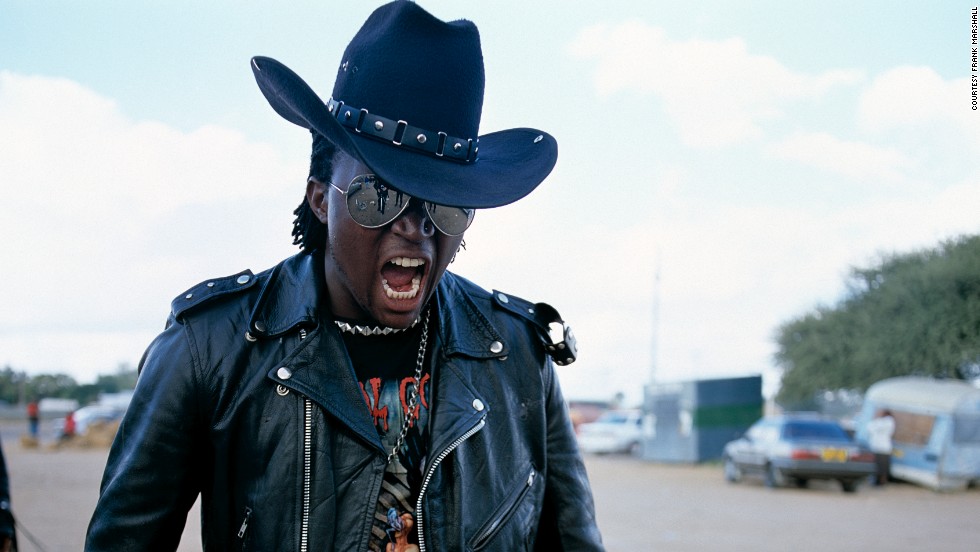 Love it or hate it, when most people think of metal, they think of white dudes. Even if metal was born from the blues and there are growing scenes in places like Indonesia and Peru, metal’s founding fathers–Priest, Sabbath, Maiden–and most of those who’ve come after have been unmistakably Caucasian. Which is why I was pleasantly surprised to find out about a small but passionate collection of guys who dressed like doomsday cowboys and listened to Motorhead in the predominantly black, central African country of Botswana. The Botswana heavy metal scene started in the 1970s with the introduction of classic rock and evolved into a distinctive sub-culture with a cowboy inspired aesthetic. Wrust, from Gaborone achieved some international success.

Ironically, metal has become a colonizing force. It has one narrative of rejecting colonizers – see Norwegian black metal vs. Christianity. But it also has disruptive potential, altering economies (shows, recordings), fashion, and perhaps even lifestyle. This Botswana example adds further complexity: black people liking and playing music dominated by white people, but which has roots in rock ‘n’ roll and the blues – music invented by black people. Perhaps reclamation (albeit unconscious) is occurring. 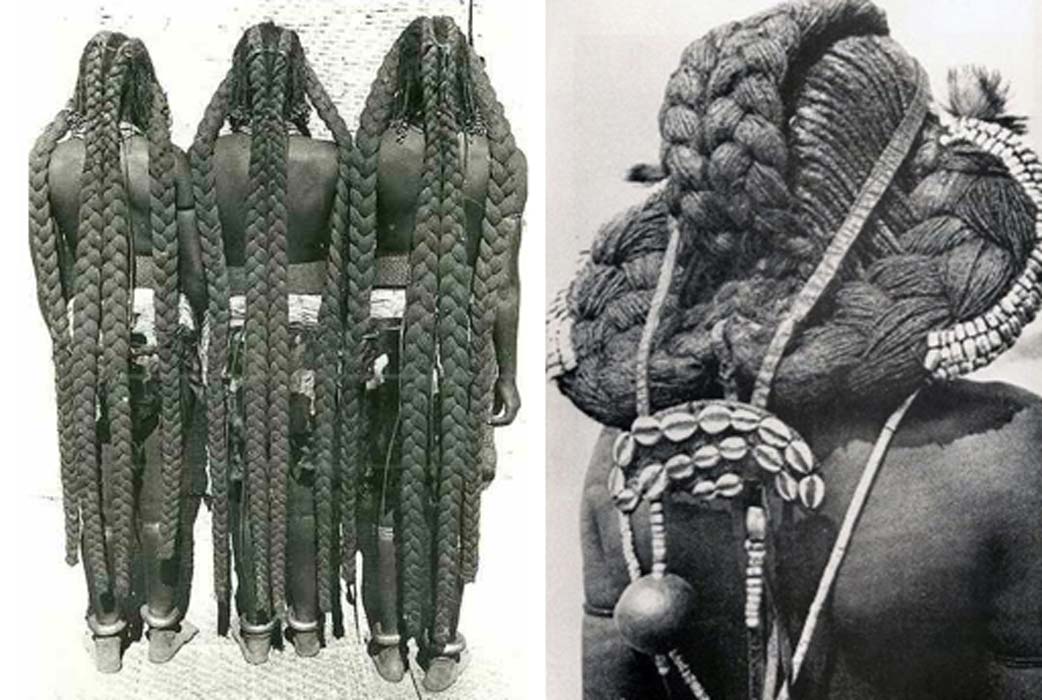 Not everyone desires floor-length hair, but if you do, you can take some lessons from the Mbalantu women of Namibia in Africa, who are renowned for their incredibly long, braided hair. Throughout the world, numerous ancient tribes exist that have retained their ancient traditions, which have been passed down from one generation to the next. The Mbalantu, which resides near the southern tips of Angola and nothern border of Namibia, did not participate in agreements signed between the German Government and various tribal chiefs in 1908, enabling them to retain their traditions and skills, which can still be seen today.

One of the greatest honors for a Mbalantu tribeswomen is to reach the stage in their life when they are permitted to wear their hair as an elaborate headdress. Preparation for this stage begins around the age of twelve, when the hair undergoes special treatment to drastically speed up hair growth. First, they coat their hair in a thick paste made from the finely ground tree bark of the omutyuula tree mixed with fat. A few years later, this paste is loosened to make the hair visible. Fruit pips are then tied to the hair ends with sinew strings.When girls reach the age of sixteen, long sinew strands that reach the ground are attached to the hair. In the same year they undergo the Ohango Initiation ceremony, a living tradition with roots in the ancient past. Before the ceremony begins, their hair is styled into four long, thick braids, known as eembuvi.

The young women “were always prepared for marriage by efundula or ohango, the initiation ceremony. The ritual had to be performed by girls in order to be accepted in the women’s category.” (Soiri, 1996) Once the girls complete their initiation ceremony, they are considered to be women. To celebrate this new status, their hair undergoes yet another change. A new layer of the tree bark and oil mixture is applied to the hair to once again encourage growth.  The length of the hair is so important to Mbalantu women that some were even known to buy hair from other women to attach to their own. After the paste is applied, the long plaits were taken up and arranged into an elaborate headdress, signifying that the woman was married. “According to historical reports this headdress was a “mighty coiffure” and was so heavy that the upper ends were often attached to a piece of rope or skin, which was fastened around the forehead in order to distribute the load more evenly,” reports the Gondwana Collection. “The front edge of the coiffure known as omhatela was often decorated with a band of large, white beads (omawe gomupolo). At the back just below the omhatela a leather strip decorated with cowrie shells was also sometimes attached.” 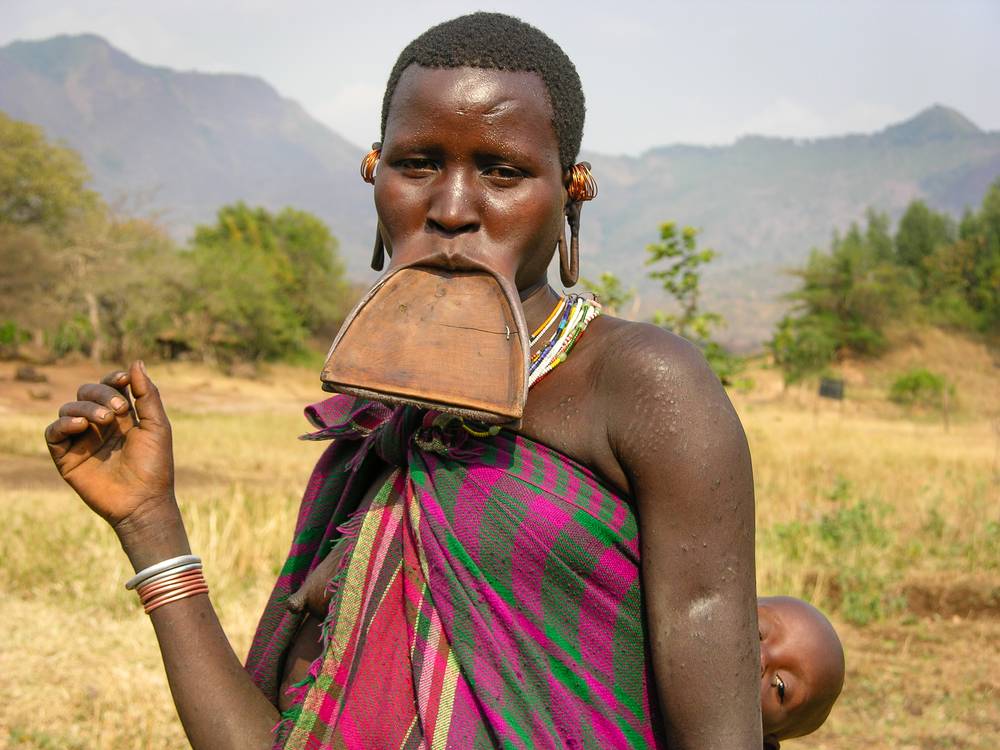 Surma is the official Ethiopian umbrella term for three ethnic groups in South Ethiopia: the Suri people, the Mursi people and the Mekan people. Very often the name ‘Surma‘ is used for the Suri people as well, but this is wrong, a Suri would never call himself a ‘Surma‘. The Suri people are semi-nomadic cattle herders and live on the west side of the Omo River in the southwestern part of Ethiopia. This area is still much undeveloped, only an unpaved road leads to the heart of the Suri settlements: Kibish. Their wealth is based on their cattle, and the main food source is the produce from their own crops. There is very little outside trade. The Surma are a highly monolingual and homogenous society, living beyond most of the influences of the modern world and its technology. Their tenuous relationship with neighboring ethnic groups often erupts in fighting and loss of life. Like the Mursi people the Suri women are wearing lip plates. The girl’s lower lip is cut when she reaches the age 15 or 16. The girl’s lip is pierced by her mother or another woman of her settlement and a simple wooden plug is inserted. The cut is held open by the wooden plug until the wound heals. After that the plug is replaced by a bigger one. The stretching of the lip continues by inserting progressively larger plugs over a period of several months. At a diameter of about 4 cm the first lip plate made of clay can be inserted, the final diameter ranges from about 8 cm to over 20 cm. Nowadays the girls in some Surma settlements decide for themselves whether to wear a lip plate or not. However, wearing a lip plate is still an expression of social adulthood and self-esteem for a Suri woman and demonstrates respect for the men.