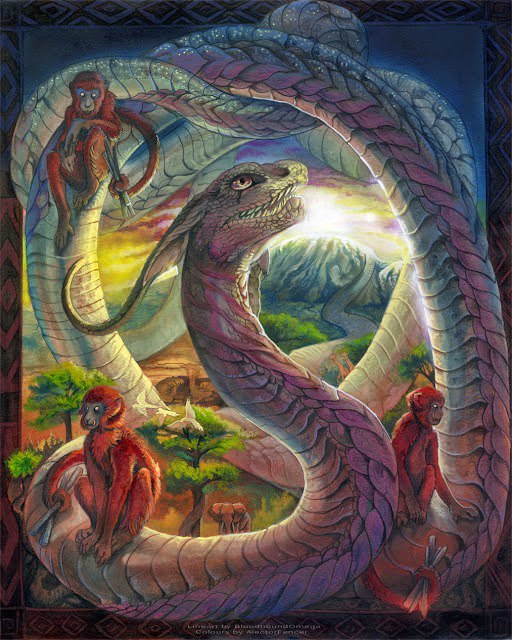 Aido Hwedo was the Rainbow Serpent and the great cosmic serpent in Dahomey and Fon mythology.  He was sometimes called the great python,  for he served Mawu-Lisa during the creation of the world. Though some accounts maintained that Mawu-Lisa created the Rainbow Serpent first, before anything else in the universe, others claimed that Aido Hwedo came into being with the first human beings or that he existed even before Mawu-Lisa.  Thus, he was not considered the son of the supreme deity. 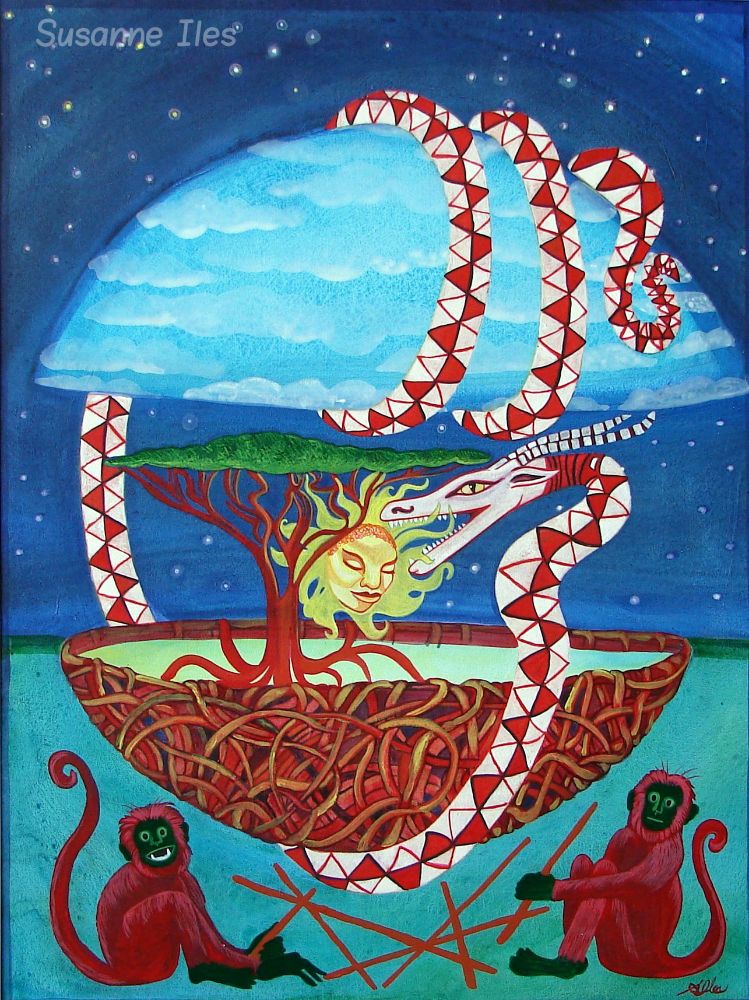 Aido Hwedo was so enormous that he had to eat vast quantities of iron to sustain his strength. When there was not enough iron, he would devour his own tail to sustain himself. He served Mawu-Lisa and participated in the creation of the universe  by acting as Mawu-Lisa’s vehicle as she filled the world,  transporting her through the cosmos  by carrying her in his mouth.  He supported the earth by curling underneath it to ensure that everything in the universe remained in its place. To this day, Aido Hwedo continues in this task. Later, the great Rainbow Serpent became known for his jealous nature, and believers were careful not to incur his wrath. Newlyweds presented special offerings to Aido Hwedo, and relatives petitioned him not to harm them. 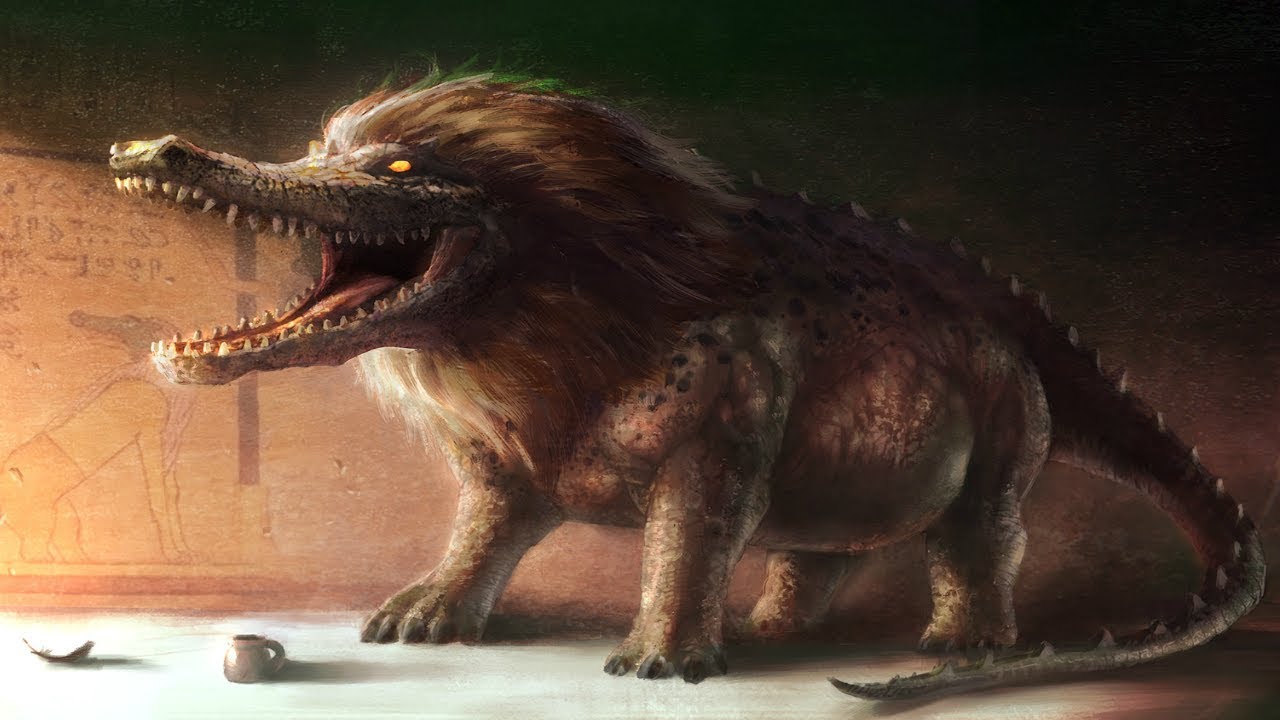 Ammit “devourer of the dead”;also rendered Ammut or Ahemait) was a demoness and goddess in ancient Egyptian religion with a body that was part lion, hippopotamus and crocodile—the three largest “man-eating” animals known to ancient Egyptians. A funerary deity, her titles included “Devourer of the Dead”, “Eater of Hearts”, and “Great of Death”.

Ammit lived near the scales of justice in Duat, the Egyptian underworld. In the Hall of Two Truths, Anubis weighed the heart of a person against the feather of Ma’at, the goddess of truth, which was depicted as an ostrich feather (the feather was often pictured in Ma’at’s headdress). If the heart was judged to be not pure, Ammit would devour it, and the person undergoing judgement was not allowed to continue their voyage towards Osiris and immortality. 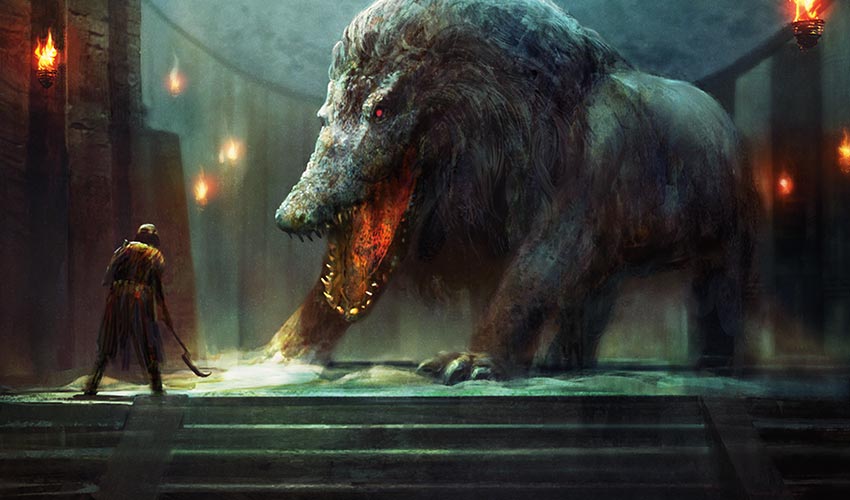 Once Ammit swallowed the heart, the soul was believed to become restless forever; this was called “to die a second time”. Ammit was also sometimes said to stand by a lake of fire. In some traditions, the unworthy hearts were cast into the fiery lake to be destroyed. Some scholars believe Ammit and the lake represent the same concept of destruction. Ammit was not worshipped; instead she embodied all that the Egyptians feared, threatening to bind them to eternal restlessness if they did not follow the principle of Ma’at.

Apophis was the deity of darkness, the enemy of the sun itself, and the ruler of the underworld.  He was the gigantic serpent that attempted to overcome the solar barque as it made nightly passage through the underworld to the horizon.  He was first mentioned in the twenty-first century BC,  and he was the fiery serpent-demon of darkness, storms,  and earthquakes.  Some texts equate Apophis with Seth, the deity of chaos; however, in other texts, Seth helps slay the serpent.

The terrible serpent Apophis had many names, and in order to destroy him, one had to curse him with every name he was known, which included the following: 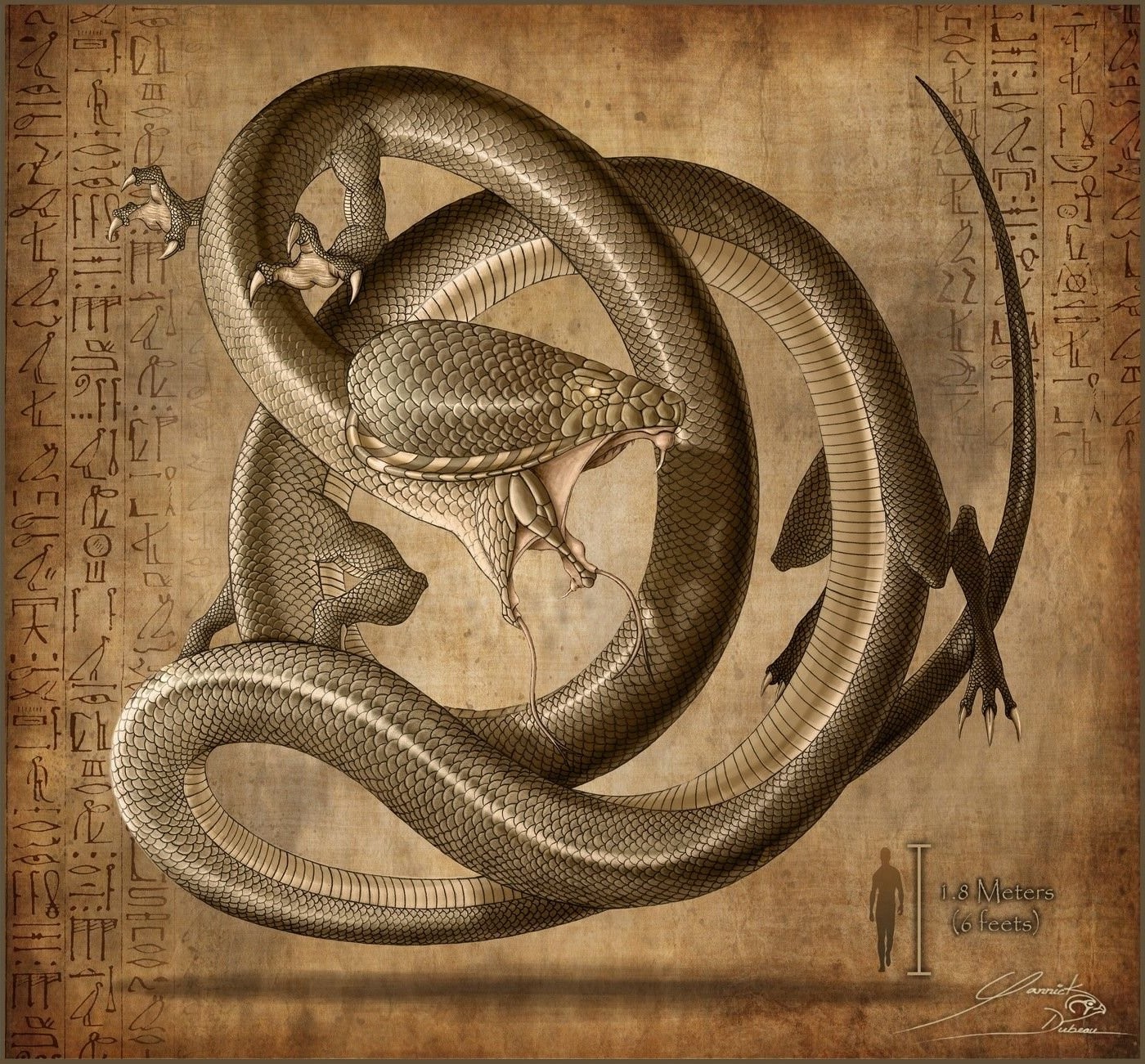 First referenced in the Pyramid Texts,  Nehebkau was a primeval snake deity.  He was the son of Renenutet,  the serpent harvest deity, and Geb, the earth god.  In another myth, Nehebkau was originally born as a human.  Other traditions claimed that Serket, the scorpion goddess, gave birth to him. Originally, he posed a threat to the dead,  but after being subdued by the servants of Atum-Re, this ancient serpent served the sun deity by feeding the dead king and acting as his envoy. 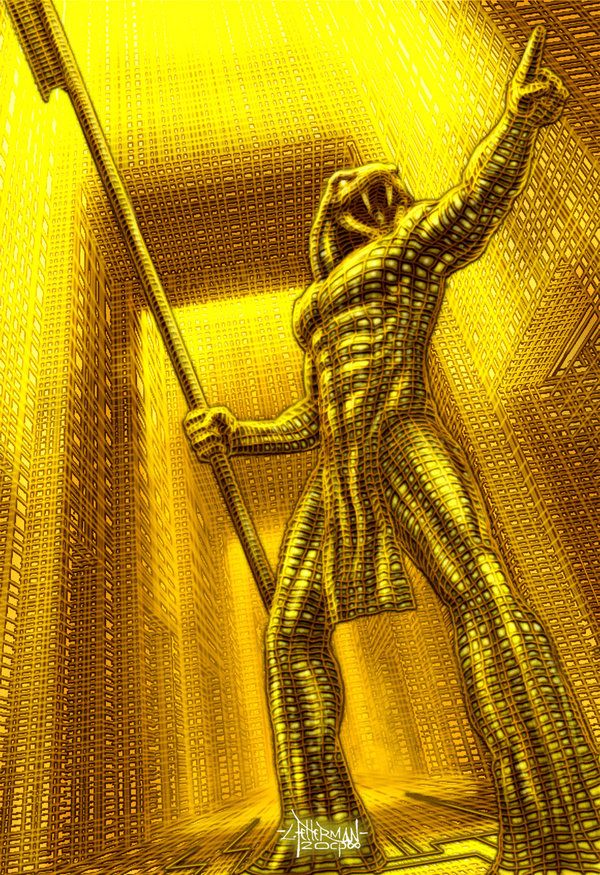 He also acted as an intercessory, as revealed by several spells that recorded the king’s request that his ‘good name’ be spoken to Nehebkau, for the serpent deity would whisper good names ‘to the Two Enneads.’  Thus, he served the sun god and aided the king.  Nehebkau also guarded the underworld.  People perceived him as a benevolent deity, despite his original threat to the dead, and in popular religion, he was widely venerated. The primary cult center for Nehebkau was Herakleopolis Magna (modern Ihnasya el-Medina). Other locations celebrated his feasts since the time of Egypt’s Middle Kingdom.