The Siddi, also known as Sidi, Siddhi, Sheedi, or Habshi, are an ethnic group inhabiting India and Pakistan. Members are descended from the Bantu peoples of the East African region. Some were merchants, sailors, indentured servants, slaves, and mercenaries. The Siddi community is currently estimated at around 50,000–60,000 individuals, with Karnataka, Gujarat and Hyderabad in India and Makran and Karachi in Pakistan as the main population centres. Siddis are primarily Muslims, although some are Hindus and others belong to the Catholic Church.

The first Siddis are thought to have arrived in India in 628 AD at the Bharuch port. Several others followed with the first Arab Islamic invasions of the subcontinent in 712 AD. The latter group are believed to have been soldiers with Muhammad bin Qasim’s Arab army, and were called Zanjis. Later the Siddi population was added to via Bantu peoples from Southeast Africa that had been brought to the Indian subcontinent as slaves by the Portuguese.

The Jarawas (also Järawa, Jarwa) are an indigenous people of the Andaman Islands in India. They live in parts of South Andaman and Middle Andaman Islands, and their present numbers are estimated at between 250–400 individuals. They have largely shunned interaction with outsiders, and many particulars of their society, culture and traditions are poorly understood.

The Jarawas are recognised as an Adivasi group in India. Along with other indigenous Andamanese peoples, they have inhabited the islands for at least several thousand years, and most likely a great deal longer. The Andaman Islands have been known to outsiders since antiquity; however, until quite recent times they were infrequently visited, and such contacts were predominantly sporadic and temporary. For the greater portion of their history their only significant contact has been with other Andamanese groups. Through many decades, the contact to the tribe has diminished quite significantly.

Afro-Paraguayan are Paraguayans of African descent. They can be found in Camba Cua outside Asuncion; Kamba Kokue outside Paraguari, and the city of Emboscada. Currently, the Afro-Paraguayan population accounts for 1% of the total population. The first African slaves arrived at Paraguay in 1556. The majority of the slaves were of Nigerian and Angolan origin, like other black people from any South American country.  According to the aforementioned Telesca, more than 4% of the population were slaves in colonial times, keeping the same percentage in the 19th century after independence. However, according to the Kamba Cuá “Afro Paraguayan Association”, in 1782, the black population represented 11.2 percent of the total population of the then Province of Paraguay.

This population continued to increase, as already in 1811, according to Telesca, half of the Paraguayan population was of African descent, whether slave or free. So, several towns like Aregua, Emboscada (in English: “Ambush”), and Guarambare were established as black communities. Also, with the arrival of Artigas’ also arrived, curiously, people of Kamba ethnicity, a Kenyan ethnic group, from Uruguay, who settled in Paraguay in the 1820s. They arrived in a regiment of 250 spearmen, men and women, who accompanied General Jose Gervasio Artigas, the revolutionary leader of the now Uruguay, in his exile in Paraguay. The Kamba Cua were dispossessed of their land by General Higinio Morinigo in the 1940s. Of his 100 hectares they stayed with 3 hectares.

Afro-Mexicans (Spanish: afromexicanos; negros; afrodescendientes), also known as Black Mexicans are Mexicans who have both a predominant heritage from Sub-Saharan Africa and identify as such. As a single population, Afro-Mexicans includes individuals descended from Spanish colonial era transatlantic African slaves brought by force to Mexico, as well as others of more recent immigrant African descent, including Afro-descended persons from neighbouring English, French, and Spanish-speaking countries of the Caribbean and Central America, and to a lesser extent recent immigrants directly from Africa. Afro-Mexicans are most concentrated in specific, largely isolated communities, including the populations of the Costa Chica of Oaxaca and Guerrero, Veracruz and in some cities in northern Mexico.

Flag of Cuajinicuilapa, Afro-Mexican town in the State of Guerrero.
According to recent DNA studies, although the average Mexican has a small amount of DNA dating back to Black African slave ancestors who had mixed into the predominant Mexican mestizo (mixed Spanish and Amerindian) genepool, averaging to about 5% Sub-Saharan African DNA, Afro-Mexican refers specifically to those Mexicans who, conversely, are predominantly of African ancestry.

Afro-Iraqis are an ethnic group that is descended from people of Zanj heritage in Iraq. Most are found in the southern port city of Basra, with many speaking Arabic and adhering to Islam. There are more than 500,000 Afro-Iraqis. Most Afro-Iraqis are the descendants of sailors, traders and slaves that were brought to Iraq from the Zanj region. The term Zanj also used to describe them is attributed to Zanzibar, an island off of the coast of Tanzania. Slave trade begun by early Arab traders started in the 9th century and lasted over a millennium. Most of these slaves were imported to work in large dates and sugarcane plantations 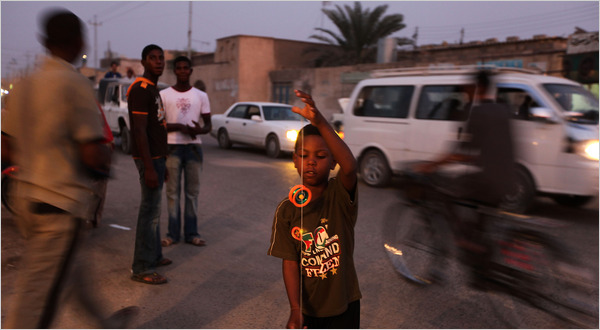 To protest their treatment, Zanj slaves from Basra staged a successful revolt against Baghdad the Muslim capital for 15 years (refer to Zanj Rebellion). During this period they created a city called Moktara. In 883, the Army from Baghdad was able to put the revolt down. Afterwards, locals did not engage in large-scale plantation-type slavery. Slavery lasted up until the 19th century. However, there were reports of dark-skinned slaves in Iraq in 2008. Unlike in the Americas of the 19th century, slaves in the Middle East were allowed to own land, and their children were generally not born into slavery. Also conversion to Islam precluded further servitude and gave freedom. Skin color played a distinctive role even amongst slaves. Many activists amongst Afro-Iraqis complain that they are unable to find opportunities to improve their social condition. However, the same complaint is often also made by Iraqis of Arab Semitic descent as well.