The Lost City of the Kalahari is a historical mystery of exploration and archaeology dating to the end of the 19th century. The history reports the existence of a ruined city found in the Kalahari Desert in southern Africa. In 1885, the Canadian Guillermo Farini (pseudonym of William Leonard Hunt) was one of the first westerners to cross the unexplored portion of the Kalahari. On his return to Europe, he published a book detailing his experiences which included descriptions of unusual rock formations which he believed to be ruins of hitherto unknown buildings. Farini subsequently presented a paper to the Royal Geographical Society (it was read in his absence and photographs taken on the exhibition were publicly exhibited, increasing his notoriety and that of his journey.

In his book Farini describes the ruins as

A half-buried ruin – a huge wreck of stones
On a lone and desolate spot;
A temple – or a tomb for human bones
Left by men to decay and rot.

A relic, may be, of a glorious past,
A city once grand and sublime,
Destroyed by earthquake, defaced by the blast,
Swept away by the hand of time.

At the start of the 20th century, Farini’s observation gave birth to a legend throughout South Africa. Some people claimed to have seen an abandoned boat or even a stone quarry in empty desert. Others attempted to explain the presence of this unknown civilization with comparisons to archaeological finds at Great Zimbabwe. From 1932, twenty five expeditions were launched to find the Lost City. They crisscrossed the desert area in the direction of Farini. F. R. Paver and Dr. W. M. Borcherds headed out from Upington to search the desert sands, flying over the area in reconnaissance aircraft and subsequently suggesting a number of explanations. However they failed to find any signs of construction in the area.

Who constructed these buildings? What happened to this ancient civilization?
Dr. Gustav Prelude, a well-known historian, reported that a party of Khoi Khoi in the Kalahari who had camped near his expedition had told him of a terrible drought and of large ruins somewhere to the north, and expressed their willingness to lead him there once the rains had fallen. The Khoi Khoi also claimed that precious stones had been found in the desert farther north. In an article “Vanished City of the Kalahari” published by Atlantis Rising magazine, David Hatcher Childress writes that “Farini described the megalithic city as a long line of stone laid out in the shape of an arc and resembling the Chinese Wall after an earthquake. The ruins were quite extensive, partly buried beneath the sand at some points, and fully exposed to view in others. They could be traced for nearly a mile, and consisted mainly of huge flat-sided stone. In some places the cement was in perfect condition and plainly visible between the various layers of the heaps. 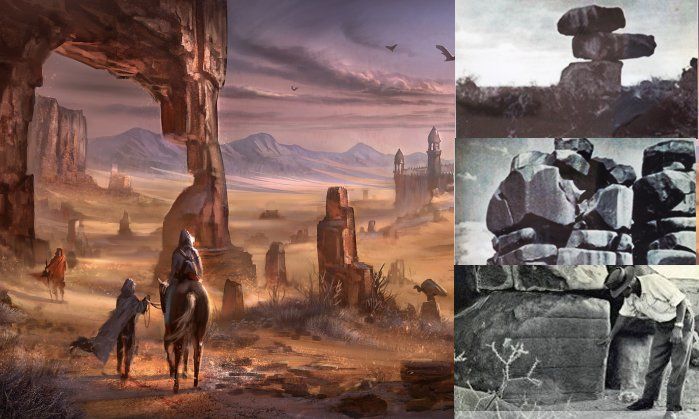