Titan is the largest moon of Saturn. It is the only moon known to have a dense atmosphere, and the only object in space, other than Earth, where clear evidence of stable bodies of surface liquid have been found. 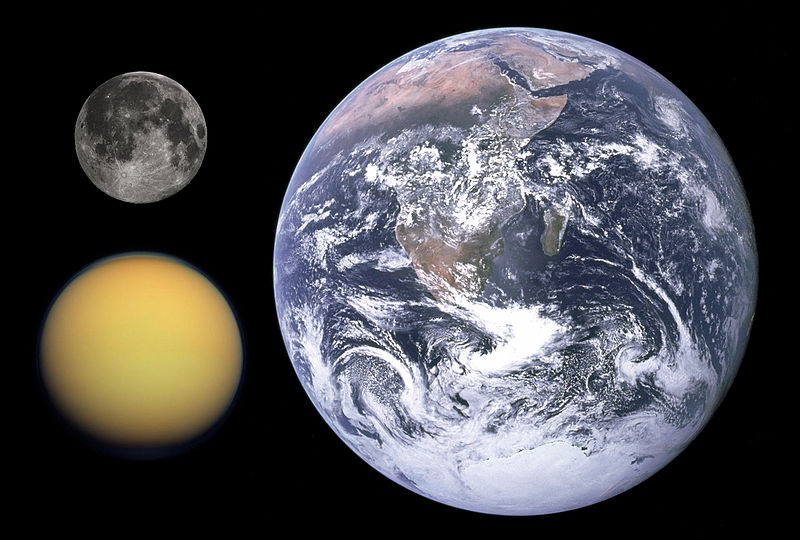 Titan is the sixth gravitationally rounded moon from Saturn. Frequently described as a planet-like moon, Titan is 50% larger than Earth’s Moon, and it is 80% more massive. It is the second-largest moon in the Solar System, after Jupiter’s moon Ganymede, and is larger than the smallest planet, Mercury, but only 40% as massive. Discovered in 1655 by the Dutch astronomer Christiaan Huygens, Titan was the first known moon of Saturn, and the sixth known planetary satellite (after Earth’s Moon and the four Galilean moons of Jupiter). Titan orbits Saturn at 20 Saturn radii. From Titan’s surface, Saturn subtends an arc of 5.09 degrees and would appear 11.4 times larger in the sky than the Moon from Earth.

Five years ago, several hundred scientists gathered at the European Space Operations Centre in Darmstadt, Germany, to witness a remarkable event: the reception of the first signals to be sent from the surface of Saturn’s largest moon, Titan. It had taken engineers a decade to plan and construct Huygens, Europe’s unmanned mission to this mysterious world. In addition, the probe’s 2-billion-mile journey there, on board its Nasa-built mother craft, Cassini, took a further seven years. A great many careers depended on the mission’s success. Hence the tension in the control room on 14 January, 2005.

“There are lakes and seas that make Titan the only other place, other than the Earth, in the solar system with large, stable bodies of liquid on its surface,” says Zarnecki. “There are also river channels; great stretches of dunes; weather and meteorology; complex hydrocarbons; and – most excitingly – powerful signs that Titan has a subsurface ocean that could provide a home for primitive life. Titan turns out to be an incredible place. It’s a moon that would be a planet.” 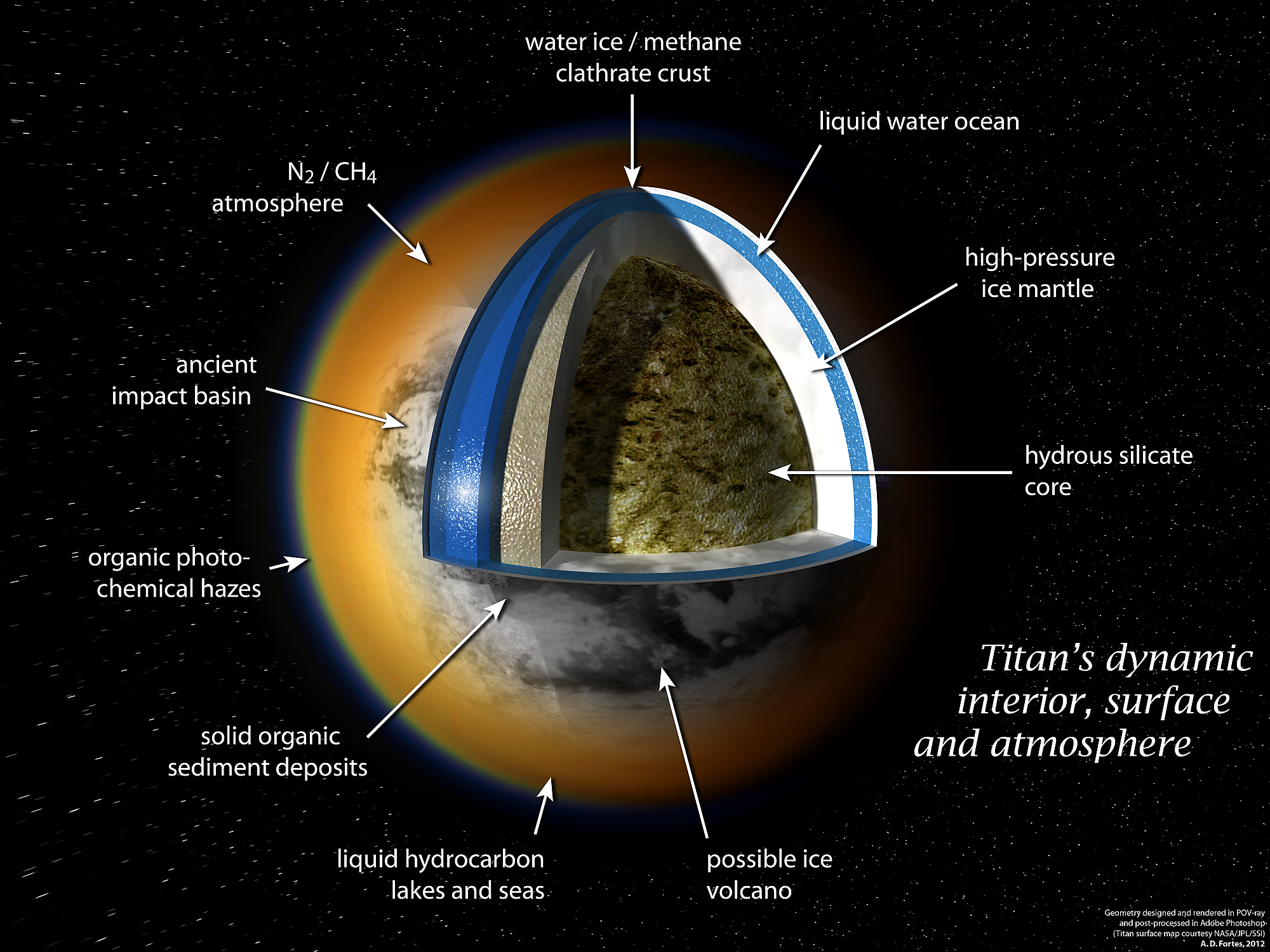 In fact, Titan looks like Earth in many ways – with one critical exception. It is extraordinarily cold, with atmospheric temperatures 200 degrees below that of our planet. Ten times further from the Sun than Earth, Titan consequently receives a hundredth of the solar heat that bathes our world. There may be complex organic material littering the place, but conditions are simply too cold on Titan for life to evolve from this material on the surface.

It turns out that those rivers, lakes and seas on the surface are not watery affairs but are made of methane which plays the same meteorological role on Titan as water does on Earth. It evaporates from great seas of liquid methane, like the giant Kraken Mare. Then it condenses and falls as methane rain, sometimes setting off flash floods that carve out riverbeds like the ones picked out by the cameras on Huygens.

“Water exists in three forms on Earth: liquid, vapour and ice,” says Zarnecki. “The same is true for methane on Titan. Hence its role in driving the moon’s weather systems.”

As for the existence of Titan’s complex hydrocarbons, these are formed in its upper atmosphere where the Sun’s weak, ultra-violet radiation breaks down methane into molecules that re-form into more complex, petrol-like hydrocarbons. These are responsible for much of the haze that has hidden Titan’s surface like a smog over Los Angeles. Devices on board Huygens have detected ethane, acetylene and other complex hydrocarbon molecules – an oilman’s dream. These hydrocarbons are then swept to the ground by the moon’s rain, though gravity on Titan is so weak that the resulting oily droplets would be far larger than raindrops on Earth.

These seas and lakes don’t tell the whole story, however. As Huygens settled on the moon’s surface, it photographed a landscape of pebbles that turn out to be made not of stone, but of ice, evidence that water exists at least in one form on Titan. 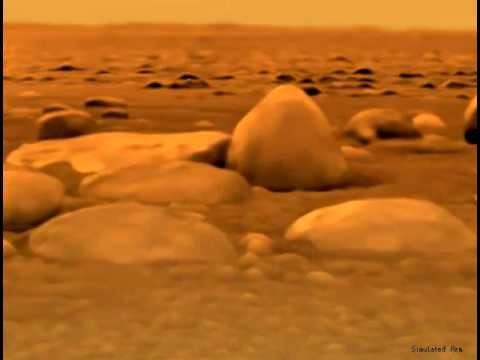 The fact is that if Titan were not so cold, it would probably be bursting with life, so plentiful are its supplies of organic raw materials, scientists suggest. The moon is, in effect, a chilled leftover from the formation of the early solar system. It is, therefore, of enormous scientific importance, according to Al Diaz, science associate administrator of Nasa, which collaborated with Europe on Huygens. “Titan is a time machine that gives us a chance to look at conditions that existed on early Earth,” he said after Huygens’s results were received.

In any case, this moon may yet have its day as a home of complex lifeforms. “In a couple of billion years, our Sun will expand to become a type of star called a red giant and will envelop Earth in superhot plasma,” says Zarnecki. “Our oceans will boil off and the Earth will become a very unpleasant place to live. By contrast, temperatures will go up nicely by a couple of hundred degrees on Titan. This will be the new Eden.” 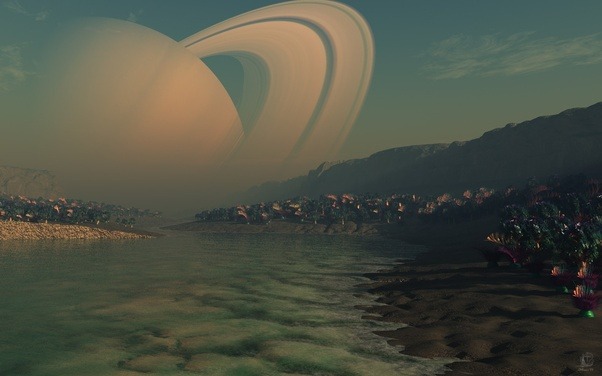 Crucial to this scenario are Cassini’s radar observations which reveal that Titan has a highly irregular rotation. “All planets and moons have slight spin irregularities, including Earth,” explains Zarnecki. “This lengthens or shortens our day by a microsecond or two. But on Titan the effect is much greater, suggesting the existence of an underground ocean which separates the moon’s crust from its core. This layer acts as the fluid in a giant ballbearing which allows Titan’s crust and core to spin at different rates, hence those irregularities.”